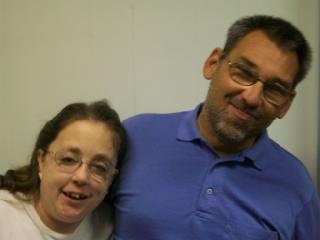 Robert and Jennifer Kuhr went to high school together but had never met until the limo ride to a People First meeting in Stevens Point on October 18, 2004. Both attended Menasha High School; Robert was in special education and Jennifer in general education classes, so their paths didn’t cross in high school.

Robert (45) was born in Neenah and had a variety of jobs before being employed by Walmart in 2001. His first jobs out of high school were at Goodwill and at Work Adjustment Services (now Lakeside), a sheltered facility. After 5 years he moved on to Mike’s Superplus grocery store where he worked for an additional 5 years as a bagger and then to Burger King. For him his best job has been at Walmart where he has worked for the past 12 years; his job coach got him the job and then faded support very early on in his career there. Robert started full time on a wage subsidy, which expired in 2010. Unfortunately his hours were then decreased to 20/week at $11.63/hour. Balancing his SSI benefits and wages has been a challenge, but Robert is pleased to have his job. He says that, “It gets me out of the house. Now I’m not doing nothing all day long.” His work hours also give him the flexibility to do advocacy work. Each year he brings 3-4 people to Madison for Disability Advocacy Day, and he counsels fellow People First members on how to talk to their legislators about the issues affecting them. He is also a 6 year member of the WI-BPDD Board, appointed by 2 governors.

Jennifer Kuhr has had a long employment history. She was born in Clintonville and graduated from high school in 1992. She then attended Fox Valley Tech College from ’92-’93 but did not earn her certificate in childcare. Frustrated by not receiving the support she needed and misunderstood by her instructors, she left college to work in a variety of jobs, the most fulfilling at Hot Now, a fast food restaurant where she worked her way up to manager. At Hot Now she “was given the chance no one else had given [her].” After 10 years, the store unfortunately was shut down in a corporate downsizing; Jennifer moved on to Arby’s and again worked up to be a trainer, but due to a disagreement with her boss, she lost that job. In 2007 Jennifer returned to college and successfully earned her degree as office assistant. She found that in spite of her degree employers wanted someone with experience, something that she did not have in that field.

After being out of a job for a year, Jennifer sought out the help of DVR; her counselor connected her to Integrated Services in Appleton. In 2009 her job coach found Jennifer the job at Piggly Wiggly, which is a perfect fit. “My bosses and co-workers are willing to help me whenever I need help.” She is paid above minimum wage and has a wonderful work environment. In addition, in December of 2011 after trying for 8 years to get SSDI (Jennifer had worked for many years and contributed to social security so was eligible for SSDI), her attorney was successful in obtaining benefits for Jennifer. She states that the extra support helps tremendously and allows her to work around her health issues.

Jennifer and Robert are a dynamic duo, who have empowered many individuals with their enthusiasm and experience. They are in a good place in their lives due to their hard work, diligence, and the support they’ve received from their community.