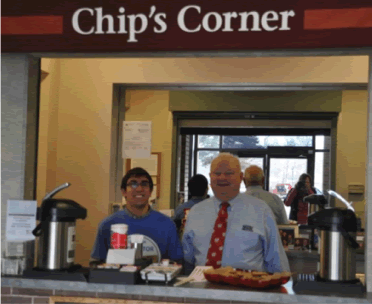 Curtis is a 17 year old Oconomowoc high school student, raised on a beef cattle farm doing chores with his family. As part of the Let’s Get to Work grant, Curtis’s teacher Mike found him a job at First Bank where he works in the employee concession area. Every Friday for 2 hours Curtis gets out of school to work with Chip, a bank employee and Curtis’s job coach. The job requires that Curtis not only handle the merchandise but that he also act as the public face of the bank. He greets employees and customers and always is courteous and friendly to everyone who comes in.

Curtis’s duties include making and serving coffee, handing out snacks and drinks to employees, stocking merchandise, making change, and most importantly, greeting the employees and visiting with them. The social aspect is Curtis’s favorite part of his job. He says the best part of his
job is “talking to people.” He also likes getting paid for his work. Curtis and Chip have a great working relationship. The role of job coach quickly shifted from Curtis’s teacher to Chip. Curtis claims that Chip helps him to do his job right, and for extra help, “he writes down things for me.”

The job has given Curtis a huge boost in his self-confidence; his mom Jill was worried at first because Curtis has always questioned himself and his abilities and has always needed constant reinforcement when doing a job. The job at the bank provides the reinforcement Curtis needs – everyone loves him, and consequently, he feels good about his work. Chip, a retired teacher who now runs Chip’s corner, says that Curtis has really changed over the past few months, becoming much less shy and more outgoing.

At home Curtis has operated small machinery with supervision, which he loves to do. He also gardens, mows the lawn, and helps out on the farm. During the summer he did a job shadow at a landscaping company, his “dream job.” “I like working with the equipment and stuff at the landscaping place.” DVR assisted in finding the job shadow for Curtis, basing it on his interests and love of being outside and operating machinery.